In 1911, following the growth in early aviation activity, the War Office issued instructions for the School of Ballooning to be expanded into a battalion. An order was issued on 28th February 1911 for the formation of the Air Battalion of the Royal Engineers effective 1st April the same year.

Formed on 1st April 1911, the Battalion comprised two companies and a Headquarters. The commander of the Air Battalion was Major Sir Alexander Bannerman. At Farnborough were the Headquarters and No.1 (Airship) Company, which was equipped with airships, under the command of Captain Edward Maitland.

On the formation of the Royal Flying Corps, on the 13th May 1912, No.2 (Aeroplane) Company, Air Battalion RE  became No.3 Squadron  RFC, commanded by Major H.R.M Brooke-Popham, as one of the three founder Squadrons.

“Towards the end of April, Captain H.R.M. Brooke-Popham took over from Captain Fulton the command of the old aeroplane company on Salisbury Plain, and on the 13th of May, when the Royal Flying Corps was formed, this company became No.3 Squadron of the new formation. No.2 Squadron was formed from the nucleus of pilots at Farnborough, and was placed under the command of Captain C. J. Burke. The airship company at Farnborough, being lineally descended from the old balloon school, became No.1 Squadron of the Royal Flying Corps, Military Wing.”

An article in Flight magazine, by John Yoxall, dated 17th March 1949, titled ‘No.3 Fighter Squadron’ and sub-titled, ‘The Story of Our Oldest “Heavier-than-Air” Unit and its Antecedents’ includes the following extract,

“Air Chief Marshal Sir Robert Brooke-Popham who, with rank of Major, at that time commanded No.2 Company, has been kind enough to record some of his recollections for Flight : “In about March 1912,” he writes, “I was seconded to the Air Battalion and told to take command of No.2(Aeroplane) Company. That was the only unit formation of any sort that possessed aeroplanes. On about May 12th or 15th No.2 (Aeroplane) Company was given a new name – No.3 Squadron, Royal Flying Corps (Military Wing). Sir Robert’s recollection is borne out by the official history, which gives the date of May 13th”

The organisation chart below illustrates the unit relationships leading up to the formation of the Royal Flying Corps. 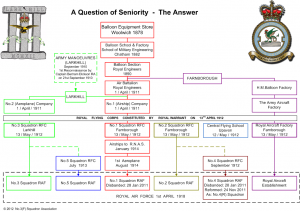 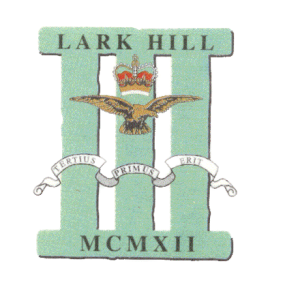 The Roman numeral III of the initial badge adopted by the Squadron, represents the monoliths of Stonehenge, which is close to the unit’s location at Larkhill on Salisbury Plain.

The Squadron’s motto “Tertius Primus Erit” – The Third shall be First – signifies the well documented fact, traceable back the activities of the Air Battalion, Royal Engineers in 1911, that the unit was the first British, Empire or Commonwealth formation to operate ‘heavier-than-air’ machines.

In August 1914 the Squadron deployed to France as part of the British Expeditionary Forces on reconnaissance duties.

In 1917 the Squadron re-equipped with the Sopwith Camel aircraft and became a Fighter/Scout unit.

After the Armistice in 1918, the Squadron disbanded before arriving at Upavon in 1924 with Sopwith Snipes.

During their stay, the Squadron flew Woodcocks, Gamecocks and Bulldogs and also deployed to Sudan during the Abyssinian crisis in 1935.

Upon its return to the United Kingdom, 3 Squadron introduced the Gladiator into RAF service and just as the Second World War started received Hurricanes at Biggin Hill.

A brief deployment to France was followed by relocation to Scotland on night-patrol duties. During 1943, the Squadron replaced the Hurricanes with Hawker Typhoons and switched to the anti-shipping and intruder roles.

A switch to Tempests in 1944 saw 3 Squadron destroy 288 V1 flying bombs, and move on to the Continent as part of the advance towards Germany.

3 Squadron remained in Germany, converting to Vampires in 1948, Sabres in 1953 and the Hunter in 1956. A short time with Javelin fighters was followed by a long period of Canberra flying, before the Squadron received Harriers in the early 1970s.
In 1977 the unit moved to Gutersloh near the old East German border, before relocating to Laarbruch with Harrier GR7s. Following the decision to close Laarbruch, No. 3 Squadron returned to the UK in the Spring of 1999, arriving at RAF Cottesmore in Rutland.

3 Squadron combined with other RAF and Royal Navy Units to form Joint Force Harrier and undertook a number of deployments on board aircraft carriers including an operational tour to Sierra Leone as part of Operation Basilica. 3 Squadron was also involved in Operation Telic.

On the 31 March 2006 the Squadron moved to RAF Coningsby to become the first front-line RAF Squadron to be equipped with the Eurofighter Typhoon.