A report on the reunion:

The annual reunion took place at the Barnsdale Hotel, Rutland on Friday 22nd October attended by 33 members and their wives. Distinguished guests included many former Sqn commanders: Graham Williams who took part in the Daily Mail transatlantic race in 1969, Sir Clive Loader, Syd Morris and of course our new President Air Commodore Ian (Cab) Townsend CBE. Unfortunately out Emeritus Life President Air Chief Marshal Sir Richard Johns could not be with us due to a pre-planned medical procedure.

The President stood up and talked about the family of 3 Sqn and how we are still going strong when some of the other early Sqn associations are flailing and not able to keep going. It’s testament to the strength of 3 Sqn that we are still well supported and keep going. He also praised the Sqn who are away at the moment as they continue to carry out their operational role in Op Shader on Cyprus. The new Sqn OC Frankie Buchler has settled in well and is taking strides to take the Sqn further . He is also keen to promote the connection between the Sqn and the Association.

The Chairman Phil Ward gave an impassioned please for funds for the proposed 3 Sqn memorial to be placed in the National Memorial Arboretum (NMA). The current memorial for the Sqn dates from 1990 and is quite small and insignificant. We need to up our game and get some funding so we can put a memorial in place worthy of the oldest RAF Sqn. We already have a legacy from the late Bob Barckley who generously donated £3000 from his estate. Other donations are beginning to arrive and we should be able to reach our target of £12000 in no time at all. We already have several designs and costing in place and if we all pull together it will become a reality. The total amount raised to date is £9820.

The raffle raised £212 which is a lovely amount and will go towards running the Association and functions. The evening ended in the hotel bar and a lovely time was had by all. It would be nice to get more people to the annual reunion and we are looking at ways to achieve this to be more inclusive and easier to get to.

If anyone would like to donate to the NMA memorial fund please click on the link below:

No Reunion this year

The 2019 Reunion took place at Barnsdale Lodge Hotel on October 18th. No report is available on the proceedings. The AGM minutes are elsewhere on this site.

The 2018 reunion took place on the 19th October at the Barnsdale Lodge hotel and was a great success. 47 members and partners sat down to a lovely dinner, and there was much meeting up of old friends and new ones made. There were speeches from the Chairman Phil Ward who said he was disappointed with the low turnout at the various events he had organised throughout the year but was happy to stay as Chairman for at least another year. The president Sir Richard Johns was as usual funny and serious in equal measures and extolled the virtues of the current squadron commander Lewis Cunningham in what has been a very busy year for them. Sir Richard has marketed his new book, Blots from the Blue, an autobiography of his life in the RAF and afterwards. He sold a box full he had bought with him and I’ve no doubt he could have sold many more.

The OC 3 Sqn gave us a brief on the current and immediate past activities of the sqn, including patrol duties over Estonia. The sqn is very engaged in its work and is as busy as ever, The Typhoon has now been in service for 10 years and has proved to be a most adaptable and stable, serviceable platform. Long may it continue. The raffle and auction of a bottle of 90th anniversary 3 Sqn whisky raised over £300 a welcome boost to the accounts. The evening ended with a repair to the main bar in the hotel where stories were swapped until the early hours. One of the best we’ve had for some time. 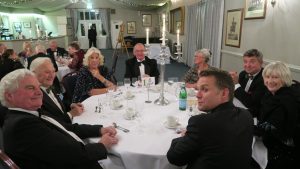 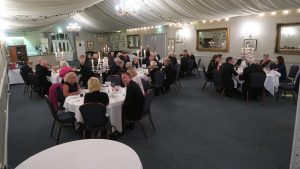 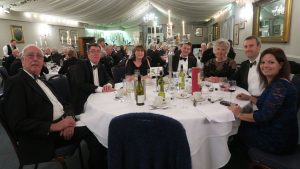 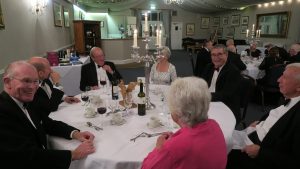 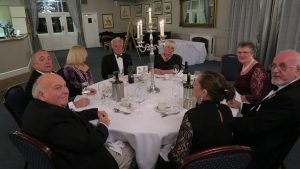 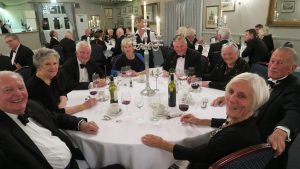