On 3 June 1983 Air Marshal Sir Paddy Hine presented 3 (F) Squadron with a new standard, this standard was subsequently replaced with one presented by the Chief of the Air Staff Air Chief Marshal Sir Stephen Dalton GCB ADC LLD(Hon) BSc FRAeS CCMI RAF to mark the 100th anniversary of the squadron on 13 May 2012 at RAF Coningsby. 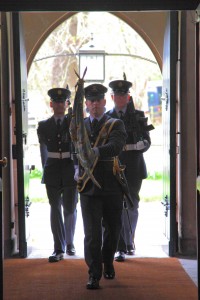 The 1983 Standard is marched in

As the squadron can only follow one standard the 1983 version needed to to laid up in a House Of God, this is traditionally been St Clement Danes in London however there is currently no room there for further standards.  The Association President therefore asked if the standard could be laid up at The Church Of St Mary and All Saints in Chitterne where he lives. 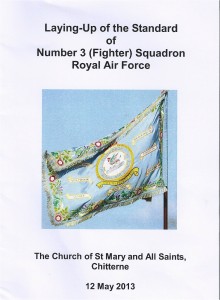 The Order of Service

The service was conducted by The Reverend (Group Captain) Nick Barry QHC BA RAF, Deputy Chaplain-in -Chief assisted by The Reverend Canon In Chisolm and the reading from the book of Ecclesiasticus (44-1-15) was provided by Officer Commanding 3(F) Squadron Wing Commander Cab Townsend MA RAF

After the service a flypast was carried out in far from ideal conditions by a Hurricane from the Battle of Britain Memorial Flight and a Typhoon FGR4 for 3(F) Squadron, the Hurricane had been due to be flown by Wg Cdr Paul Godfrey but due to a family emergency a late substitue was used, The Typhoon was however flown by Flt Lt (Geeky) Hawkes, this being his last flight in the RAF. 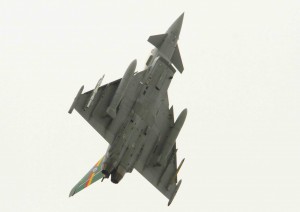 Before lunch was taken in the village hall a special presentation was made to OC 3(F) by Capt. Phillip Brooke-Popham OBE (RN), the son of the original OC of the Squadron Major Brooke-Popham, of a leather bound copy of his Flying Log book. 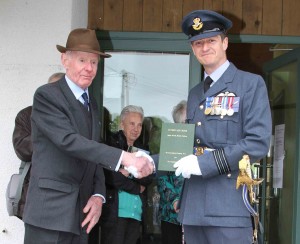 In this logbook the entries in the Major’s own handwriting show that on the 13th May 1912 he was at Larkhill and not at Farnborough as has been claimed elsewhere and so could not have flown a dual sortie with OC 2 proving once and for all that indeed The Third Were the First.

All the work for this book and the presentation are the result of many hours of determined work by 3(F) Squadron Association member Vic Lorriman and the President, Honorary Life Vice President, Chairman, Vice Chairman and Committee would like to thank him for that work and are indebted to him for it.

After a splendid lunch in the village hall and more photographs and catching up most people had dissipated by 2:30 p.m.