On 12th May 2012 during the Families Day which formed part of the 100th anniversary celebrations 2 Typhoons fron No. 3 (F) Squadron took off from RAF Coningsby on a training sortie over the North Sea.

During the take off run I took a series of photographs, one of which stood out from the rest and it was decided to have it enlarged and framed and presented to the squadron. 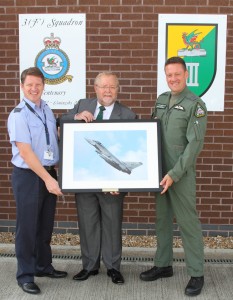 From left to right (as you look at it) – Sqn Ldr Hall, David Holmes, Wg Cdr Patounas 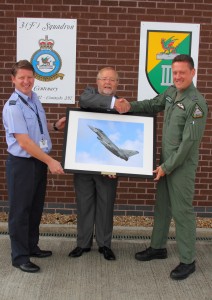 Wg Cdr Patounas accepts the picture on behalf of the squadron.